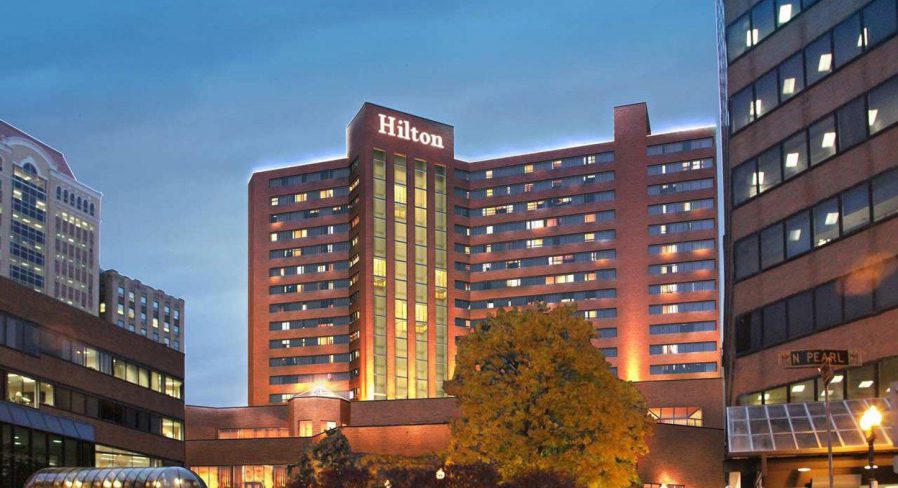 United Capital Corp. announced today that it has acquired the 17-story, 385 room Hilton Albany hotel, located in the heart of Downtown Albany, New York, just one block from the New York State Capital Building and the closest hotel to the Times Union Center, Albany’s home for arts and entertainment.

Although the Hilton Albany has been a quintessential fixture in the Albany skyline for more than three decades, it recently completed a $16 million renovation, making it the newest and most elegant hospitality property in the area. This comprehensive renovation included all new guest rooms, corridors, and elevators, as well as upgrades to its more than 30,000 square feet of meeting and banquet space, the largest in the area. The Hotel is also home to the newly renovated Charter Restaurant, offering a sophisticated and upscale dining experience, and the Sessions Lounge, a great place for a power lunch, meeting with friends or an evening cocktail.

In commenting on the announcement, A.F. Petrocelli, United Capital’s Chairman and President, noted “This is by far the finest hotel in the Capital region and we are proud to add it to our growing portfolio.” General Manager of the Hilton Albany, John D’Adamo added, “The Hilton Albany continues to spearhead the hospitality and tourism resurgence of the Capital region by offering the largest and most up to date accommodations, as well as the finest food, beverage and meeting services available under one roof. We are proud to continue our leadership position in the City and region as part of the United Capital team.”